“Belief is the death of intelligence.” -Robert Anton Wilson

Full disclosure. I’ve spent most of my life as what many would call a vegetarian.  I’m not a vegan, although many days I eat like one.  I also have days where I may eat some fish or eat some dairy, so those days I’m only partially vegetarian in the strictest sense of the word.

I wasn’t aware vegans had any opposition to beekeeping until recently. A Los Angeles based blogger reached out to me about our products, only later to decide she couldn’t write about them because they contain honey (and other bee products) and this went against her vegan ways.  So I did some research, and I learned the rationale behind these notions and consequently feel it necessary to set the record straight as I can see many vegans are misinformed.  We’ve kept bees via natural management practices for over 15 years.  So what I have to say applies to how natural beekeepers tend to their bees and the vegan point of view.

Belief number one: Beekeepers exploit honeybees because they are kept like livestock and they clip the queen’s wings so she can’t leave.

Fact:  We purchase bees and a queen from time to time from keepers like us and set them up in a bee pad akin to a comfy, human luxury apartment. This home must have a fresh water source nearby and must be a in a place free of the predators that like to eat bees and their honey.  It also must allow bees to come and go as they please and have plenty of diverse foraging area within four miles of the hive.  If they want to leave forever they can, but believe it or not, most don’t.  I’ve never really talked to one to see if they went to visit a distant relative for a few weeks, but my point is a beekeeper can’t truly ‘keep’ a bee.  They tend to stay with the queen.  She’s the more important piece of the pie. Where she goes they go.  If she leaves they leave. Oh, and we don’t clip anyone’s wings.  No need.  In 16 years and many, many hives, only one queen has decided she wanted to leave, so we let her. Well, we couldn’t exactly stop her. Good by queen with intact wings along with all your little bees.  Safe travels.  Nice to know you.

Belief number two:  We take their honey and other hive products, plus we feed them sugar in exchange which exploits them and makes them ill.

Fact:  Bees live in hives which they love to fill with honey.  In fact, they tend to fill them with so much honey that the hive can become honey bound which will ultimately kill the colony because there is no room for new brood AKA baby bees.  We only take the excess they produce in mid-summer, and that is placed by the bees in an extra box we gave them to fill or not to fill. It’s truly their choice.  In reality, it’s not much honey.  That’s why we have so many hive, so we won’t stress our bees or even impact their lifestyle.  Believe me when I tell you if you live in a suburb or a city you are impacting bees far more than I ever will. The same goes for the propolis and wax we use.  It’s stored in that same extra box and these are the only products we get from our bees.  Bees generally make enough food for winter.  If they don’t we sure aren’t taking any from that hive, instead we watch them and help them out. When our bees have died, it was not due to lack of food.  Now and then ecology comes into play when some springs are longer than expected and the bees run low on honey before they are able to forage.  Take note of the fact that during such springs wild bees face the same issue.  This occurrence has nothing to do with our taking honey the year before.  It’s nature.  When it does happen we give our bees our stored honey.  On occasion we’ve given them a nutrient mixture that contain sugar if we have no honey to offer.  We do this to keep them alive.  Had they been in a hollow tree in the wild during a spring like this they would not survive.  If we didn’t do this, then we would be killing our bees.

Belief number three:  We kill bees in the process of taking their honey.

Fact:  Not true.  Vegans – please watch a natural beekeeper at work.  It’s an art.  No dead bees.  Why would we kill them?  We love our bees.  I think they at least like us.  Do you realize bees know their keepers? They don’t even try to sting us. They may sting you if you get near their hive because you are an intruder.  I’ve spent many moments with a butterfly net in tow getting a single bee out of the barn and back to its hive.  No, we aren’t in the business of killing bees.  By the way a honeybee’s life expectancy varies depending on many natural factors including the stress it is under.  The average is three months. I’d like to think ours have a longer life than average but no one can ever say for sure.  I can say this, they’ve been given every chance to thrive in our bee yard.

Belief number four:  Honeybees aren’t native to the United States and therefore are threatening wild bees by competing for forage, plus they spread diseases and viruses to them.

Fact:  They have found fossilized honeybees in the United States so they were here long before we were.  It is true, European settlers brought the European Honey Bee (Apis mellifera) with them in 1622.  Honeybees live in large colonies where most native bees are solitary. There is clear evidence that native and honey bees cohabitate–the presence of one does not imply a lack of the other. Farmers who increase the diversity of foraging areas such as grasslands, wetlands, forest etc. near their farms, successfully increase both honey and native bee populations. So rather than being a detriment, the honeybees are a benefit. Why?  Honeybees prefer many flowers in ONE area. They gravitate towards plants that are loaded with flowers whereas native bees, such as bumblebees, mason bees, and carpenter bees will visit flowers just as efficiently regardless of flower density.  In the fields this equals increased pollination overall.  What’s killing all pollinators isn’t other pollinators.  It’s humans.

Can honeybees spread diseases to native bees? The simple answer is yes but the more complicated answer is that diseases and parasites are far more diverse than the thousands of bee species that exist. The bulk of the research which has been conducted has been on honeybees, not native species.  That research is severely limited.  So there is bias, which means the evidence to date simply is not there. Yet the research does show this.  Humans are killing all pollinators. 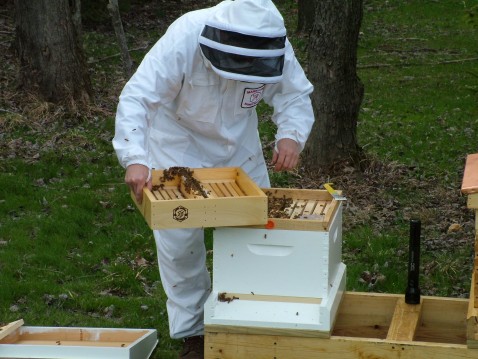 As I said earlier by choice I’ve maintained a vegetarian diet for most of my life.  In doing so I’ve always been acutely aware that as altruistic as my choice may be, I could never accomplish my goal without the assistance of a complicated system of food cultivation and distribution.  Let’s face it I’m no native living in the bush.  I could never have gone to work outside the home and returned home to cultivate all of the foods I need to be healthy.  I freely admit I need grocery stores and the farmers who fill them up.  Beyond that even if I managed to survive without those things, most of humanity would not.  Without the systems we have in place there would be chaos and therefore I still could not hold onto my altruistic beliefs.  I may well be reduced to, God forbid eating a rabbit.

My point is, you have to be reasonable and realistic when proclaiming a belief.  It best be based on fact.  I applaud the goals of vegans within reason. I share many of the same goals. Yet the fact remains without beekeepers, most people would not have enough to eat.  Any crop with a seed needs to be pollinated and that requires a bee.  More often than not a honeybee.  If you eat any food that has a seed and you won’t eat honey, logic would follow that you shouldn’t be eating those foods because you are exploiting a pollinator.  Likewise I will go further and say if you live in a comfortable home, drive a car, shop in a grocery store, walk on a sidewalk, or otherwise live in the civilized world you have destroyed precious habitat that technically pollinators, native plants and all other native creatures relied on before you came along.  If you are eating any cultivated foods I can guarantee that some innocent critter has gotten squashed, smooshed or maimed in the process. Also as you are reaching for your sweatener of choice, the one you feel is superior to honey, I can offer a list of how non sustainable they all can be and how many creatures are impacted by the harvesting. So you see, ‘exploitation’ is a tricky word.  If you can’t disclaim all of the above activities then according to the vegan definition of animal explotation, you have ‘exploited’ some living creature, too.

As a foot note, I give full and total credit for the management, happiness and health of our apiary to our beloved beekeeper, my husband -Joel.